Off the carbs, off the couch – Diamond Hill CrossFit

Off the carbs, off the couch

“Nutrition is just as—if not more—important than movement.”

CrossFit Seminar Staff member Joe Westerlin said that shortly after he had drawn a small triangle in the upper-left corner of a whiteboard at CrossFit Omaha. He had divided it into five sections from top to bottom, labeling each: sport, weightlifting and throwing, gymnastics, metabolic conditioning, and, at the base, nutrition.

It was Day 2 of the CrossFit Level 1 Certificate Course, and it was time to talk food.

The two-day course teaches the fundamental principles and movements of CrossFit. Those who attend the course and pass the subsequent exam earn the title CrossFit Level 1 Trainer.

Many think the Level 1 course is focused on movement—so why was Westerlin talking about nutrition? And why did he say nutrition is at least as important as movement in CrossFit? 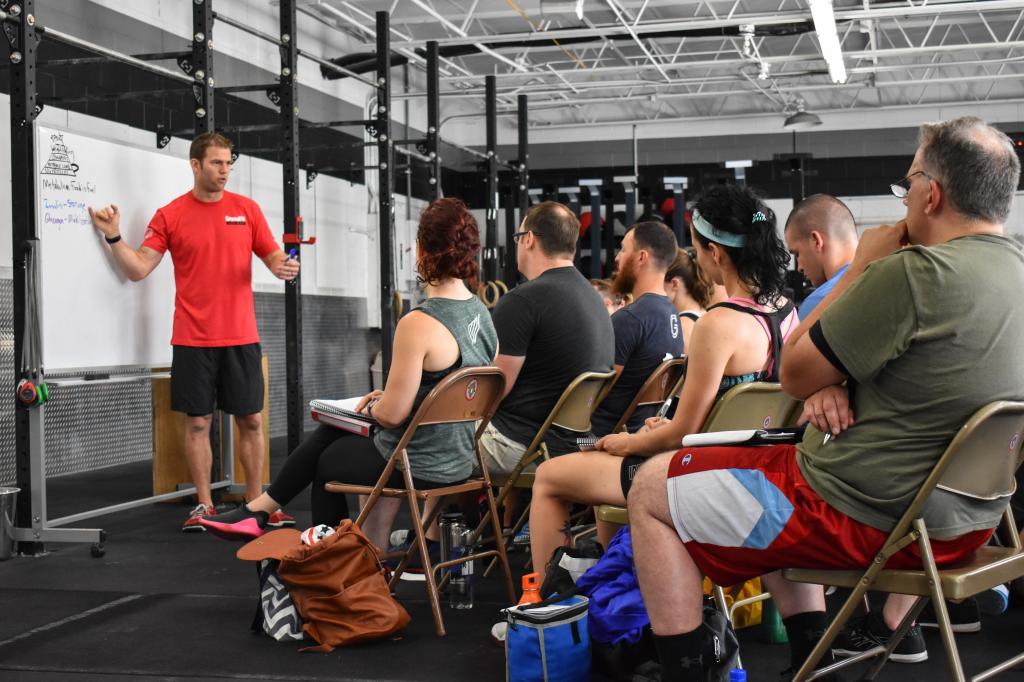 In the CrossFit Level 1 Certificate Course, Joe Westerlin (left) and other Seminar Staff members will teach you how to move—and how to eat. (Brittney Saline/CrossFit Journal)

In an interview after the lecture, Westerlin—a Certified CrossFit Coach (CF-L4) and a member of CrossFit’s Seminar Staff since 2009—expounded on his opening statement.

“Movement—you’re moving your physical being, so it’s clearly important. But all that is powered and controlled by everything that’s inside your body,” he said. “Whether it’s at the level of basic life—the life of the cells—or on the other end of the spectrum to the highest levels of optimizing performance and disease prevention, it’s all controlled by metabolism, and metabolism is controlled by the food that we consume.”

CrossFit Founder Greg Glassman called the CrossFit approach “contrarian,” partly because the food and beverage industries would have you believe all that sugar in your Coke isn’t a problem as long as you exercise.

Below the triangle on the whiteboard, he had written the word “insulin.” 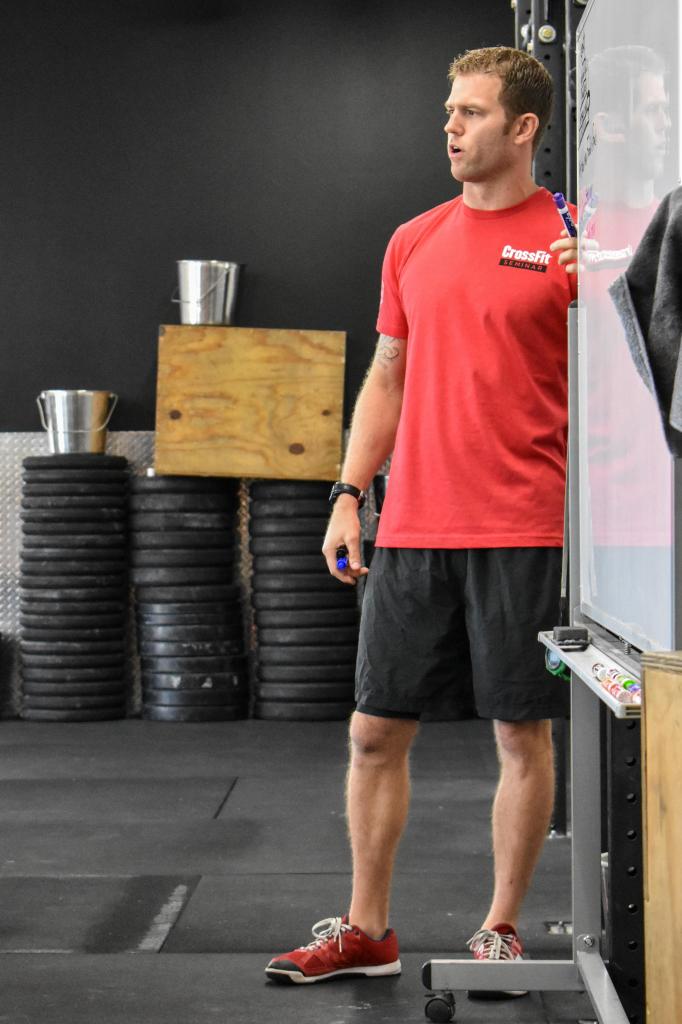 Despite what the food and beverage industries say, you can’t out-exercise a bad diet. (Brittney Saline/CrossFit Journal)

Insulin is a hormone produced by the pancreas in response to carbohydrate consumption. It’s responsible for storing energy in cells and regulating blood sugar, and you need it to live. But if you produce too much insulin, cell receptors no longer respond to it, allowing blood-sugar levels to rise and setting the stage for a host of health problems, such as Type 2 diabetes, atherosclerosis, organ failure and death.

“You can see that the way to get your insulin level too high (hyperinsulinism) is to eat too much carbohydrate,” Glassman said in a 2007 lecture, adapted for print in the Level 1 Training Guide.

In the guide as well as in “Nutrition: Avoiding Metabolic Derangement,”Glassman also writes about “the deadly quartet,” or obesity, glucose intolerance, hypertriglyceridemia and hypertension. He cites research performed by Dr. Norman Kaplan, who posited that obesity is not the cause of the latter three quartet members but rather a correlate, with hyperinsulinemia as the root cause.

“Whether the link between hyperinsulinism and disease states is causal or correlative will be debated for years. But the tide is dramatically shifting towards causality in many, many disease states,” Glassman wrote.

“What cannot be debated is that reducing carbohydrate intake eliminates hyperinsulinemia in nearly every occurrence. … We strongly counsel that you opt out of hyperinsulinemia while the scientific community continues slogging along.”

CrossFit trainers need to understand this “because you can make profound changes in someone’s health with very little education on nutrition and biochemistry,” Westerlin said.

On the other side of the whiteboard, he had written: “Eat meat and vegetables, nuts and seeds, some fruit, little starch and no sugar.”

Westerlin explained: “If you can get them to do that, you will do more than what a person with a four-year dietetics degree is doing for someone. If you can get someone to stop consuming sugar, you can save them from premature death and suffering.”

And that’s just on one end of the spectrum. 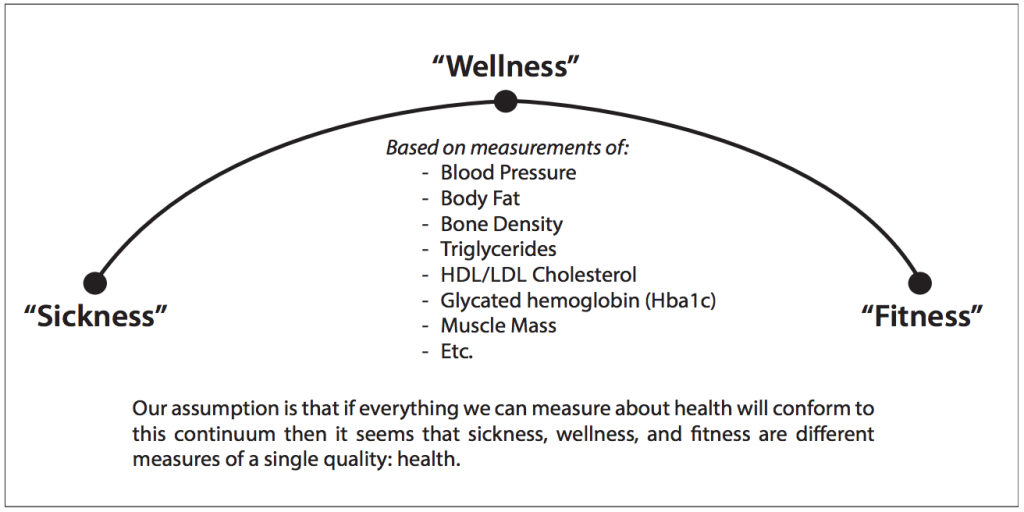 If you limit carbohydrate intake and start training, you’ll move from sickness to wellness. If you continue on that path, you’ll earn a place among the fit. (CrossFit Journal)

Consider CrossFit’s Sickness-Wellness-Fitness Continuum. Glassman wrote that “nearly every measurable value of health can be placed on a continuum that ranges from sickness to wellness to fitness.” Just a few among these values are blood pressure, body fat, muscle mass and triglycerides—as well glycated hemoglobin, or red-blood-cell protein molecules bound to glucose, an excess of which is a marker of Type 2 diabetes.

On Day 1 of the Level 1 course, CrossFit Level 3 Trainer and Seminar Staff member Pablo Cervigni had explained CrossFit’s definition of health: fitness measured across age. As we train, each of us can work toward our own genetic potential—the highest possible expression of our individual fitness. But can people get there without addressing nutrition?

“They cannot—not even close. It really comes back to Coach Glassman’s Theoretical Hierarchy of the Development of the Athlete—nutrition is at the base of it all,” Westerlin said, referencing the famous “pyramid” he had drawn earlier.

He continued: “So the person that’s increased work capacity at a typical gym—their scores do go up, yet they still hang on to their excess body fat. Usually you can find (the cause) in the fundamental question, ‘Well, what’s your diet look like?’”

So regardless of whether you’re training a gifted athlete or a 300-lb. woman in her 50s, nutrition matters. And if you think choosing broccoli over a blueberry muffin is common sense—and thus not something you need teach your clients—you’d be wrong in far too many cases.

“I don’t think that most people know that (chronic disease) in a very, very large part comes from the way that we eat,” Westerlin said. “I think most people think that the obesity is due to inactivity and that the chronic conditions that their parents have or that everybody’s taking medication for is just kind of in the cards or is a byproduct of just getting older, whereas it’s just not.” 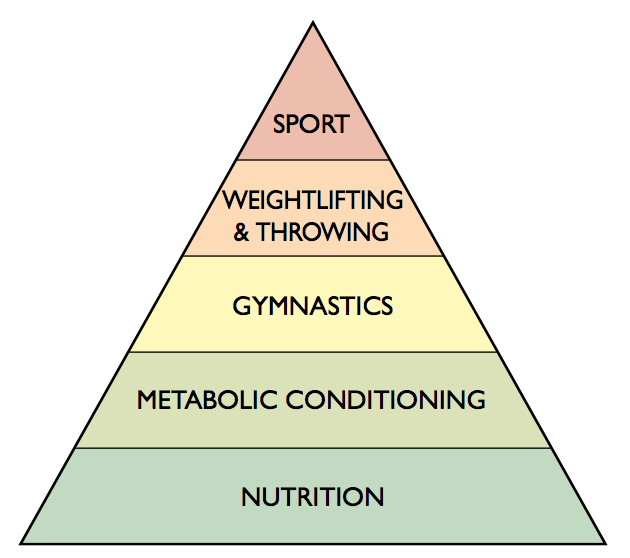 If you think high-level skills are the most important components of CrossFit, you’re mistaken.

After Day 2’s nutrition lecture, seminar participants broke for lunch. Some fled the gym to replenish caffeine stores, and others hunkered in corners to study for the upcoming test.

It was a lot of information to take in—in roughly an hour, they’d learned how to ward off chronic disease and improve performance in the gym with the foods they consume. If they remembered nothing else, what did Westerlin hope was permanently etched in their minds?

“You have to control carbohydrate intake—carbohydrate drives insulin, insulin drives disease,” he stressed. “Coach Glassman says ‘off the couch and off the carbs.’ It’s not saying that just not being on a couch is the solution, and it’s not saying get off all carbs, but on a relative level, most people suffering from chronic disease are spending a lot of time on the couch, and they’re eating an overabundance of carbohydrate.”

About the Author: Brittney Saline is a CrossFit Journal writer and editor. She trains at CrossFit St. Paul.